Orienting An Object Along A Path

So I wanted to show off a somewhat interesting technique of deriving vectors from an objects translation keyframes. In this example I oriented the pyramid to aim along the tangent of the path it is taking and used the world y-axis as the secondary axis of orientation. Something similar can be done more easily with motion paths but requires the creation of a nurbs curve which would need to be recreated if you wanted to change the keyframing. This system is less constraining fo

So I have a pretty good understanding of how matrices work in Maya, but that's a very different thing from being able to apply that knowledge. So I decided to try and create a matrix based rivet. So attaching a locator to a surface is easy if you know about the four-by-four matrix node. Just create a point on surface info node and plug the position, normal vector, and one of the tangent vectors into the matrix and then turn the matrix into tranform attributes using a decompo

So I talk about the pose reader v1 and v2 in the scripts section of my site, so I won't cover them here. This isn't really a new approach, it's more of a tweak, hence v2.5 instead of v3. So the issue with the sphere as I was using it was that it could only handle four poses. This was intentional because I always did four corrective poses, but as I have continued to push the quality of my deformations I found that I needed more poses to blend between in order to get the desire 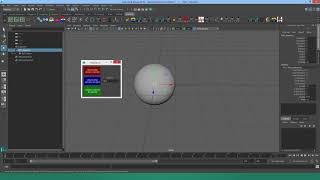 Inside / Outside Detector Part 2

So the inside / outside detector itself isn't that useful by itself, but I was thinking about how to expand upon it to maybe get some cheap approximations of collisions. My thought process was as follows: when the the point is outside the surface, do nothing, when it is inside push it outside by sliding it along a user-defined vector until it is outside. The "slide until" part was the issue, because I don't know of any node system that would do that without being cyclical. Bu
1
2
3

A method for remapping blendShapes between characters.

Why The UVN Deformer Is So Useful

First Images From The My Little Pony Movie I Worked On!

Driving Cluster With Matrices Instead of Handles